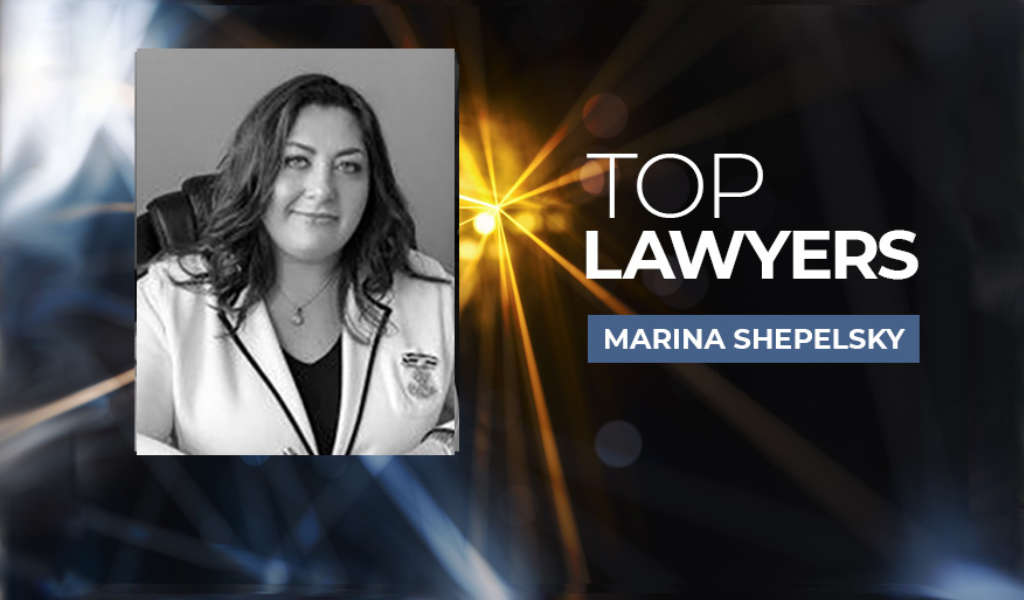 Marina Shepelsky: How to Be a Top Lawyer in Your Niche

Marina Shepelsky: How to Be a Top Lawyer in Your Niche

What does it take to become a successful lawyer? In a series of in-depth interviews for the Estrin Report, Chere Estrin profiles top lawyers from all types of practices, and we’re highlighting their top five tips here. This week, the spotlight is on immigration and divorce lawyer — and social media star — Marina Shepelsky.

Born in what was then the Soviet Union in the Ukrainian capital, Kiev, Marina Shepelsky was 12 years old when she arrived in the United States and underwent the naturalization process. Now as founder and CEO of three-lawyer Shepelsky Law, she practices immigration law along with family and divorce law.

A biology major at New York University, she pivoted from pre-med to law after working part-time at a couple of law firms during college. “I applied to medical school, which didn’t work out,” Shepesky recalls. “I realized that medicine was not what I thought it would be, and I fell out of love with it.” But with English not being her native language, she didn’t believe she would do well with public speaking. Intellectual property law sparked her interest until she found it to be boring.

“In law school, I really thought I’d have to do something with science, like medical malpractice. I then dabbled in patents and trademarks and intellectual property law. But it was too dry for me,” she says.

“I went out on my own, quickly, after I started practicing, and fell into immigration law,” she says. Shepelsky laments the complexities of an immigration law practice because of its “many rules and even more exceptions,” but she enjoys the writing. “I was good at filling out forms and writing stories. A lot of immigration cases are about writing a story and presenting your case, and I always did that, ever since I was a kid.”

Shepelsky’s team has mastered video marketing and social media to build the practice, with 62,000 TikTok followers and a robust YouTube channel.

She is licensed in New Jersey and New York as well as the Eastern and Southern Districts of New York and the U.S. Supreme Court. She is admitted in all 58 U.S. Immigration Courts and the Board of Immigration Appeals.

The Five Things You Need to Be a Top Lawyer, According to Marina Shepelsky

According to Shepelsky, top lawyers need to develop these traits:

When I want to settle a case, I call the trial attorney (those who work for ICE) and say, “Come on, I have a great case, let’s agree and settle. Let’s agree he can get asylum.” When or if they disagree, I go straight in front of the judge, and I use my voice. Just because someone thinks I don’t have a good case, I don’t give up. The uphill battle is one I’m willing to fight. I have the same situation occur with divorces. Counsel says, “I’m a man, I’m older, I’m more experienced, your client gets nothing.” This empowers me and gives me the chutzpah to keep fighting.

Believe in yourself even if your rational brain says you have a bad case. Even if you don’t win, you gave the person a chance, and you fought for them. That being said, it’s not always the best evidence or the papers that win a case; it’s being a really zealous person and advocate for your client.

I’ll work with, for and against anyone. I had to learn English and go to school and college in a second language. I didn’t even think in English then. That was hard work. I acquired a whole new culture in a short time and pushed myself. On top of the same difficulties everyone else my age had, I had to learn the language and culture. Overcoming adversity brought me to where I am. In America, working hard pays off. Other places are not always like that. Corruption and nepotism prevent people from this experience. It drives me to work hard so that my clients can do the same.

Working remotely changed everything for the better for small firms and for me. It’s now totally acceptable to work from home and have a family. I don’t have to come to the office (although we come in a few days a week). We can do video or phone calls, and people are getting used to using technology to send documents. I can represent people anywhere, which gives us a lot more opportunities. This offers a much better profit for small businesses.

Without being creative, I wouldn’t be nearly as successful as I am today. I’ve channeled this into my social networking platforms. I use them as an outlet to spread news and information while getting an incredible amount of new business.

Chere Estrin is the CEO of Estrin Legal Staffing, a well-recognized nationwide staffing organization based in California. She is the President of the Organization of Legal Professionals. Chere was recently interviewed by Wall Street Journal & Fortune Magazine (www.estrinreport.com) and has written 10 books on legal careers, hundreds of articles and written up in publications such as the Los Angeles Times, Chicago Trib, Newsweek, Entrepreneur and others. Her blog, The Estrin Report, has been around since 2005. Chere is a recipient of LAPA’s Lifetime Achievement Award, Los Angeles/Century City Women of Achievement Award and a finalist for the Inc. Magazine Entrepreneur of the Year award. She is a former administrator in an AmLaw 100 firm and Sr. Vice President in a $5 billion company. She can be reached on Sundays from 3am-5am. Reach out at: chere@estrinlegalstaffing.com.

This article was also featured in Attorney at Work.