Weight! Weight! Are You Sabotaging Your Career? Those Extra Pounds May Be Holding You Back

By Chere EstrinJune 5, 2016Careers
No Comments

A update to a popular piece….. 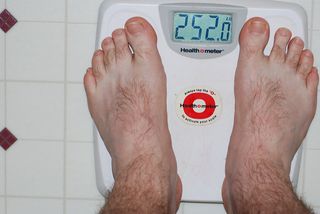 Have you ever considered that those extra pounds that sneaked up when you were just “having an extra bite” might be holding your career back?

Some years ago when I was just starting out working for a major Los Angeles law firm, my mentor, Sinatra, the Director of Administration, asked me to lunch.  No, not the star but for a variety of reasons you sure as heck were never going to forget this memorable guy's name.

I was delighted.  He took me to the Yorkshire Grill where he insisted that I have the pastrami sandwich piled high on thick rye bread smothered in hot yellow mustard along with a generous helping of potato salad ladled with heavy home-made mayonnaise.   Who can refuse their boss? Career buster for sure.  I dug right in.

After lunch, while we were walking – well, he was walking, I was waddling, back to the office, he hit me with “You’re doing a great job here.” Wow.  I liked that.  “However,” he proceeded, “if you’re going to succeed, you’ll have to lose weight.” To this day, I could tell you exactly where we were standing, the window I was standing in front of, what I was wearing and the time he gave me the news.

What many employees fail to recognize is that this is a new workplace.  We are, rightly or wrongly, visually judged everywhere:  Facebook, Instagram, LinkedIn, Skype, Snapchat (now getting more hits than Twitter). You’re even interviewed face-to-face via internet. Then there are the constant pictures from iphones, iPads, emails, websites, videos and more.  We’re no longer a society floating in a world of the anonymous voice. We are judged not only by who we are but unfortunately, how we look.

In fact, according to one source, there is a proposal in the UK that puts forth that obese claimants could see their benefits reduced or increased according to how often they attempt to lose weight. Robin Thompson, a former legal recruiting professional and now in legal marketing, knows first -hand about weight discrimination. She’s lost 200 pounds. “As a thin person,” she says, “I am greeted with much more friendliness and taken more seriously.  I have even had people comment that people who are overweight cannot control some aspect of their life and that it’s a reflection on how they would perform in a professional situation.”

You don’t have to be 100 pounds overweight to be discriminated against. “Chunkies” might take a look at the progression of their career over “thinnies”.  Have those around you advanced while you remain at the same level?  Sure, maybe they are more qualified but truthfully, are they thinner?  Does a secret glass ceiling exist at your workplace because of weight? Is there anyone really heavy in upper management?  Of course, there’s an exception or two but it’s really that – an exception.

While many victims of weight bias have suspected their appearance has been hurting their careers, two past studies analyzing decades' worth of research showed just how pervasive the problem is. The bulk of research has shown that the bias tends to be felt most by overweight white women, who are battling both the glass ceiling and the stigma of being heavy.

A 2004 study by Cornell University Associate Professor John Cawley found that when the average white woman puts on an additional 64 pounds, her wages drop 9%. (Some studies have shown that overweight white women are evaluated more harshly than overweight African American women   and that African Americans tend to be more accepting of large body types.)

In 2004, Charles Baum, of Middle Tennessee State University, reported in the journal Health Economics that obesity could lower a woman's annual earnings by as much as 6.2% and a man's by as much as 2.3%.

“Fat, lazy and unproductive” might be some of the stereotypes that ring true to employers who reject an obese applicant despite a stellar resume. Published last month in the International Journal of Obesity, a new study examined the role anti-fat prejudice plays in workplace hiring practices.

What the reviewers did not know was that the pictures clipped to the resumes were of the same six women before and after weight loss surgery. The study results showed that obese women received more negative responses on leadership potential, predicted success, likelihood to select, salary, total employment rating and rank order of preference relative to other candidates.

Employers today want to keep healthcare costs down. The heavier you are, studies show, the more days off you take and the more vulnerable you are to certain illnesses.  While your work may be excellent, chances of promotion may be slim. (Pardon the pun, please.)  Have you been in the same position for 20 years while being told that you are an excellent attorney, paralegal, manager,  legal professional? Surely there must be somewhere upward on the firm ladder you could climb.  If it hasn’t happened and your work is terrific, ask yourself, why, why, why?

Fat is one of the last bastions of discrimination with very little done to curb prejudice or  intolerance.  Being overweight does not mean a person is unmotivated or lazy.  Chances are if you made it into in a law firm environment, you are smart, good at your job and ambitious.  In fact, because of excess weight, people may even be more driven than others.

In the job market world, few recruiters will be or can be  honest with you. They are asked but "not asked" to send candidates with "front office appearance" a very old and outdated code for "professional appearance" the new unspoken code for yes, good-looking or not obese. You'll probably never see that written or spoken anywhere. It is not accepted to put your picture on your resume. You are not supposed to be hired based upon how you look, rather only upon your skills.

However, there must be some reason why people in this new social media era are rushing to view your LinkedIn profile (that contains your picture) other than to read the very same thing on your resume. Do you honestly think it's only to read your summary? Partially, perhaps. But only partially.

On the personal side, I did very little in terms of losing weight for years.  Oh, I was up, I was down, I was going to lose those “last few pounds” but frankly, despite a very satisfying career, I never really did see the light.  I had no problem getting up in front of 300 people to deliver a speech. I was no wallflower, that's for sure. Without going into details, I came to  a come-to-the big-guy meeting and took Draconian-like steps to cure a lifetime of ridicule and bias. Sure, people want to be accepted “just the way they are and for whom they are” despite any well documented health risks and concerns – as so they should be.  But that’s not reality.  Excess weight can kill you. You just don't think it's going to happen to you. It happens to the other guy.  Despite anyone’s sincere efforts to change the world, this discrimination probably isn’t going stop soon.  It's going to get worse. Fair?  Absolutely not.  Make you want to rebel?  You betcha.  But consider this: the world has changed. It’s visual now. It's more health conscious – like knowing about smoking. You see someone doing it and you know it's wrong. In addition to discriminating, that's another reaction being overweight causes.

By the way, while I’m on my soapbox, please beware of those of us who are on weight loss programs.  These "just saw the light and you can too" folks can be righteous and annoying; they will preach, lecture and moralize – all the while (for those who succeed) advancing their careers just splendidly. Along those lines, I’m no innocent flower. I'm pleased to announce that I have lost over 115 125 pounds and kept it off for over three  four years. It’s one of the hardest battles I’ve ever fought and am hopefully, winning. But that remains another story meant for another day.

Chere Estrin is the CEO of Paralegal Knowledge Institute providing online paralegal training and CEO of Estrin Legal Staffing. She has written 10 books on legal careers, hundreds of articles and been  interviewed by The Los Angeles Times, Newsweek, ABA Journal and many publications. She has been a Paralegal Administrator in two major firms, an exec in a $5 billion corporation, is President & Co-Founding Member of Organization of Legal Professionals (OLP) providing online legal technology training and Co-Founding Member of International Practice Management Association (IPMA), Inc. Magazine Entrepreneur of the Year finalist and Los Angeles/CenturyCity Chamber of Commerce Woman of Achievement Award Winner. She is a Los Angeles Paralegal Association Lifetime Achievement Award Recipient and New York City Paralegal Excellence award winner. Talk to her at chere@estrinlegalstaffing.com